Chapter 27 Specification of the Virtual Machine

Specification of the Virtual Machine

Form of the Specification

The interpreter routines in this specification will all be in the form of Smalltalk method definitions. For example

The routines in the specification will contain five types of expression.

Another difference between Interpreter and a machine language implementation is the degree of optimization of the code. For the sake of clarity, the routines specified in this chapter have not been optimized. For example, to perform a task, Interpreter may fetch a pointer from the object memory several times in different routines, when a more optimized interpreter might save the value in a register for later use. Many of the routines in the formal specification will not be subroutines in a machine language implementation, but will be written in-line instead.

The interface to the object memory uses zero-relative integer indices to indicate an object's fields. Instances of Integer are used for both object pointers and field indices in the interface between the interpreter and object memory.

The protocol of ObjectMemory contains pairs of messages for fetching and storing object pointers or numerical values in an object's fields.

Even though most of the maintenance of reference counts can be done automatically in the storePointer:ofObject:withValue: routine, there are some points at which the interpreter routines must directly manipulate the reference counts. Therefore, the following two routines are included in the object memory interface. If an object memory uses only garbage collection to reclaim unreferenced objects, these routines are no-ops.

Since every object contains the object pointer of its class description, that pointer could be considered the contents of one of the object's fields. Unlike other fields, however, an object's class may be fetched, but its value may not be changed. Given the special nature of this pointer, it was decided not to access it in the same way. Therefore, there is a special protocol for fetching an object's class.

The length of an object might also be thought of as the contents of one of its fields. However, it is like the class field in that it may not be changed. There are two messages in the object memory protocol that ask for the number of words in an object and the number of bytes in an object. Note that we have not made a distinction between words and pointers in this case since we assume that they both fit in exactly one field.

Another important service of the object memory is to create new objects. The object memory must be supplied with a class and a length and will respond with a new object pointer. Again, there are three versions for creating objects with pointers, words, or bytes.

Two routines of the object memory allow the instances of a class to be enumerated. These follow an arbitrary ordering of object pointers. Using the numerical order of the pointers themselves is reasonable.

Another routine of the object memory allows the object pointers of two objects to be interchanged.

The interpreter provides two special routines to access fields that contain SmallIntegers. The FetchInteger:ofObject: routine returns the value of a SmallInteger whose pointer is stored in the specified field. The check to make sure that the pointer is for a SmallInteger is made for uses of this routine when non-SmallIntegers can be tolerated. The primitiveFail routine will be described in the section on primitive routines.

The storeInteger:ofObject:withValue: routine stores the pointer of the SmallInteger with specified value in the specified field.

The interpreter also provides a routine to perform a transfer of several pointers from one object to another. It takes the number of pointers to transfer, and the initial field index and object pointer of the source and destination objects as arguments.

Objects Used by the Interpreter

There are many constants included in the formal specification. They mostly represent object pointers of known objects or field indices for certain kinds of objects. Most of the constants will be named and a routine that initializes them will be included as a specification of their value. As an example, the following routines initialize the object pointers known to the interpreter. 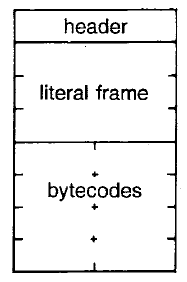 The header is a SmallInteger that encodes certain information about the CompiledMethod.

The literal frame contains pointers to objects referred to by the bytecodes. These include the selectors of messages that the method sends, and shared variables and constants to which the method refers.

❏ Method Headers Since the method header is a SmallInteger, its value will be encoded in its pointer. The high-order 15 bits of the pointer are available to encode information; the low-order bit must be a one to indicate that the pointer is for a SmallInteger. The header includes four bit fields that encode information about the CompiledMethod. Figure 27.2 shows the bit fields of a header.

The object pointer count indicates the total number of object pointers in a MethodContext, including the header and literal frame.

The following routine returns the byte index of the first bytecode of a CompiledMethod.

The flag value is used to encode the number of arguments a CompiledMethod takes and whether or not it has an associated primitive routine.

The eight possible flag values have the following meanings:

Since the majority of CompiledMethods have four or fewer arguments and do not have an associated primitive routine, the flag value is usually simply the number of arguments.

The following routine returns the index of the field representing the instance variable to be returned in the case that the flag value is 6.

The following routines are used to access a header extension and its bit fields.

Any CompiledMethod that sends a superclass message (i.e., a message to super) or contains a header extension, will have as its last literal an Association whose value is the class in whose message dictionary the CompiledMethod is found. This is called the method class and is accessed by the following routine. 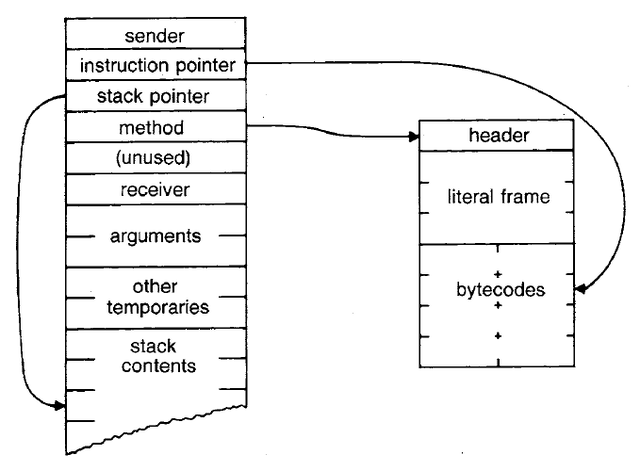 The indices used to access the fields of contexts are initialized by the following routine.

Both kinds of context have six fixed fields corresponding to six named instance variables. These fixed fields are followed by some indexable fields. The indexable fields are used to store the temporary frame (arguments and temporary variables) followed by the contents of the evaluation stack. The following routines are used to fetch and store the instruction pointer and stack pointer stored in a context. 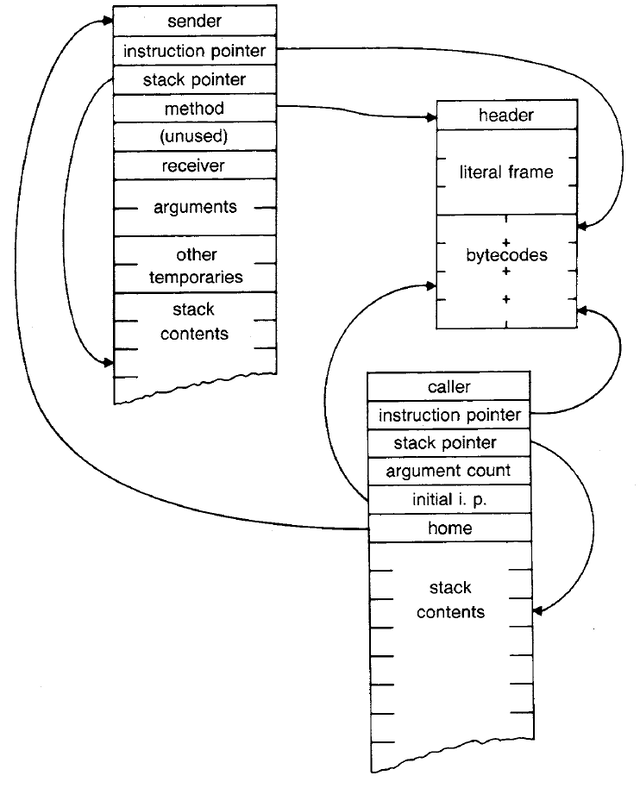 A BlockContext stores the number of block arguments it expects in one of its fields.

Whenever the active context changes (when a new CompiledMethod is invoked, when a CompiledMethod returns or when a process switch occurs), all of these registers must be updated using the following routine.

The values of the other cached registers do not change so they do not need to be stored back into the context. The instruction pointer stored in a context is a one-relative index to the method's fields because subscripting in Smalltalk (i.e., the at: message) takes one-relative indices. The memory, however, uses zero-relative indices; so the fetchContextRegisters routine subtracts one to convert it to a memory index and the storeContextRegisters routine adds the one back in. The stack pointer stored in a context tells how far the top of the evaluation stack is beyond the fixed fields of the context (i.e., how far after the start of the temporary frame) because subscripting in Smalltalk takes fixed fields into account and fetches from the indexable fields after them. The memory, however, wants an index relative to the start of the object; so the fetchContextRegisters routine adds in the offset of the start of the temporary frame (a constant) and the storeContextRegisters routine subtracts the offset.

The following routines perform various operations on the stack of the active context.

The following routines fetch fields of contexts needed by the interpreter infrequently enough that they are not cached in registers. The sender is the context to be returned to when a CompiledMethod returns a value (either because of a "↑" or at the end of the method). Since an explicit return from within a block should return from the CompiledMethod enclosing the block, the sender is fetched from the home context.

The caller is the context to be returned to when a BlockContext returns a value (at the end of the block).

The following routine provides convenient access to the literals of the currently executing CompiledMethod. 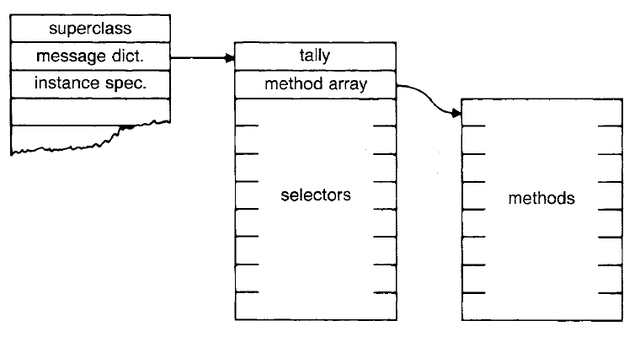 The interpreter uses several registers to cache the state of the message lookup process.

The following routine looks in a dictionary for a CompiledMethod associated with the Symbol in the messageSelector register. If it finds the Symbol, it stores the associated CompiledMethod's pointer into the newMethod register, its primitive index into the primitiveIndex register and returns true. If the Symbol is not found in the dictionary, the routine returns false. Since finding a nil or an appropriate Symbol are the only exit conditions of the loop, the routine must check for a full dictionary (i.e., no nils). It does this by keeping track of whether it has wrapped around. If the search wraps around twice, the selector is not in the dictionary.

The following routine initializes the indices used to access fields of a Message.

The instance specification field of a class contains a SmallInteger pointer that encodes the following four pieces of information:

Figure 27.8 shows how this information is encoded in the instance specification.