As explained in the previous chapter, Forms represent images. Lines can be created by copying a Form to several locations in another Form at incremental distances between two designated points. Higher-level access to line drawing is provided by instances of class Pen.

In addition to the implementations inherited from BitBlt,a Pen has a Point that indicates a position on the display screen and a Number that indicates a direction in which the Pen moves. A Pen understands messages that cause it to change its position or direction. When its position changes, the Pen can leave a copy of its Form at its former position. By moving the Pen to different screen positions and copying its Form to one or more of these positions, graphic designs are created.

Several programming systems provide this kind of access to line drawing. In these systems, the line drawer is typically called a "turtle" after the one first provided in the MIT/BBN Logo language (Seymour Papert, MindStorms: Children, Computers and Powerful Ideas, Basic Books, 1980; Harold Abelson and Andrea diSessa, Turtle Geometry: The Computer as a Medium for Exploring Mathematics, MIT Press, 1981). The protocol for Pens supports messages that are like the turtle commands provided in Logo. These consist of commands for telling the turtle to go some distance, turn some amount, to place a pen in a down position, and to place a pen in an up position. When the pen is down and it moves, a trace of the turtle's path is created. The corresponding Pen messages are go: distance, turn: amount, down, and up.

Multiple Pens can be created and their movement on the screen coordinated so that the process of creating a graphical design can itself be graphically pleasing. The next section contains the protocol that is provided in class Pen. Subsequent sections give examples of designs that can be created by sending messages to Pens.

Instances of class Pen are created by sending Pen the message new. A Pen created this way can draw anywhere on the display screen; its initial position is the center of the screen, facing in a direction towards the top of the screen. The Pen is set to draw (i.e., it is down) with a source Form or nib that is a 1 by 1 black dot.

creates a Pen with a black Form that is 2 bits wide by 2 bits high.

Continuing to use the example, bic, and assuming that the display screen is 600 bits wide and 800 bits high, we have

Notice that when the Pen direction is towards the top of the display screen, the angle is 270 degrees. Notice also that the Pen is currently outside its drawing region and would have to be placed within the Rectangle, 50@ 50 corner: 250 @250, before any of its marks could be seen.

The "turtle" drawing commands alter the Pen's drawing state, orient its drawing direction, and reposition it.

If we then ask

Suppose that we drew a line with a Pen and then decided that we wanted to erase it. If the line had been drawn with a black Form, then we can erase it by drawing over it with a white Form of at least the same size. Thus

draws the black line. Then

sets the drawing mask to be all white (the message white is inherited from the protocol of BitBlt), and then

draws over the original line, erasing it.

An exercise that is common in the Logo examples is to create various polygon shapes, such as a square.

will draw the polygon. We can create a class Polygon whose instances refer to the number of sides and length of each side. In addition, each Polygon has its own Pen for drawing. In the definition that follows, we specify that a Polygon can be told to draw on the display screen; the method is the one described earlier. 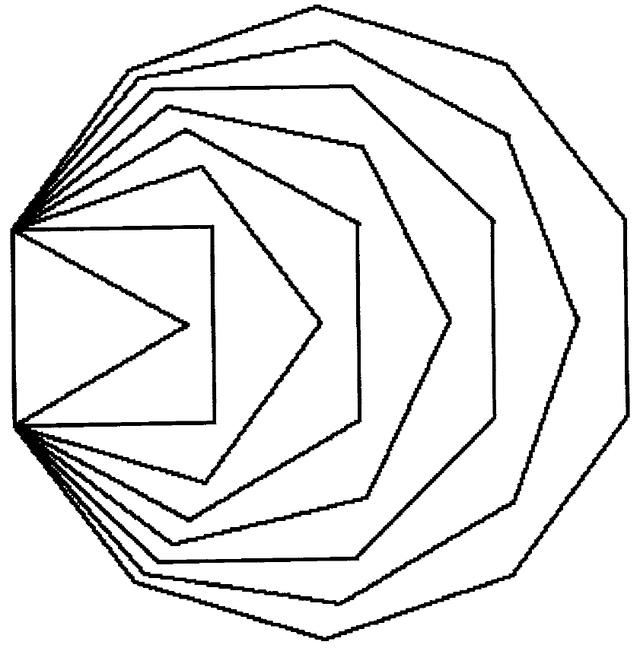 The Logo books mentioned earlier provide extensive examples of how to use this kind of access to line drawing in order to create images on a computer display screen. We provide several examples of methods that can be added to a Pen so that any Pen can draw a geometric design such as those shown in Figures 19.2 19.5. (Note: These methods are in the system as part of the description of Pen so that users can play with creating geometric designs.)

The first design is called a spiral.A spiral is created by having the Pen draw incrementally longer lines; after each line is drawn, the Pen turns some amount. The lines drawn begin at length 1 and increase by 1 each time until reaching a length equal to the first argument of the message spiral:angle:. The second argument of the message is the amount the Pen turns after drawing each line.

Each of the lines in Figure 19.2 was drawn by sending bic the message spiral:angle:, as follows. 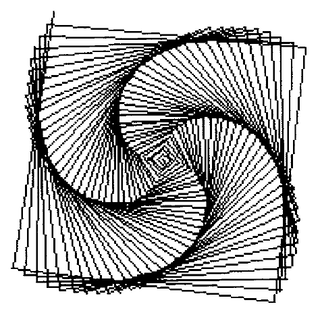 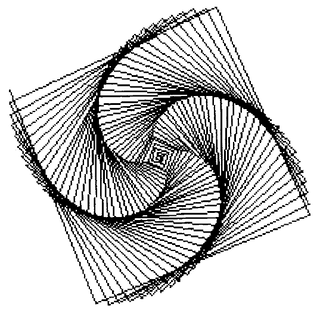 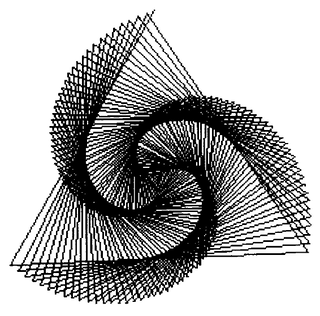 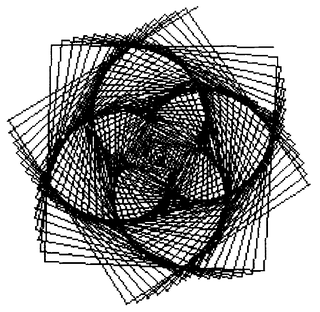 Figure 19.3 is an image of a "dragon curve" of order 8 which was drawn in the middle of the screen by evaluating the expression

The method associated with the message dragon: in class Pen is 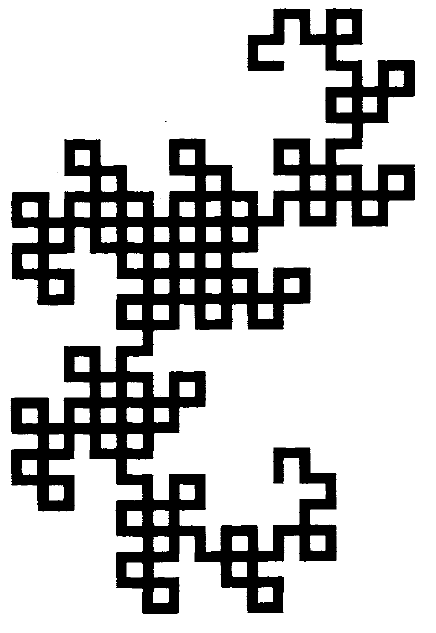 Figure 19.4 is a space-filling curve attributed to the mathematician David Hilbert. A space-filling curve has an index; as the index increases to infinity, the curve tends to cover the points in a plane. The example is the result of evaluating the expression

The index for the example is 5; at each point, a line 8 pixels long is drawn. The corresponding method for the message hilbert:side is 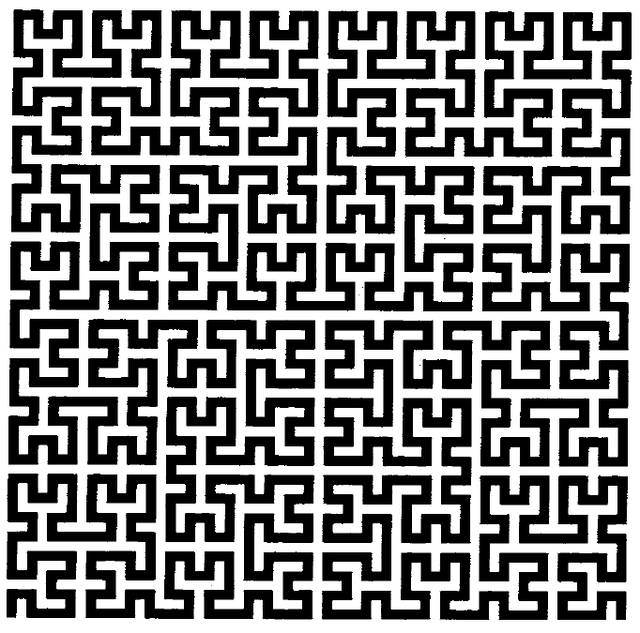 Hilbert curve, where the source form is a different shape, creates a nice effect. Suppose the Form is three dots in a row; this is a system cursor referred to as wait. The image in Figure 19.5 was created by evaluating the expressions 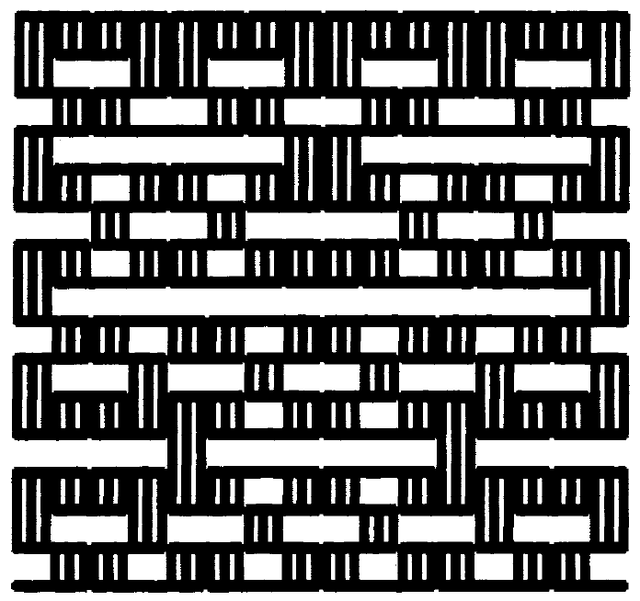 Expressions Cursor wait and Form under access a Form and a combination rule, respectively, that are constants in the system and that are known to the named classes. Other such constants are listed in a section of the next chapter. The messages sourceForm: and combinationRule: are inherited by Pens from their superclass BitBlt.

The next example is shown in Figure 19.6. Although we can not show the process by which the design was created, it is a nice example for the reader to try. The basic idea is to create an object that controls several Pens and coordinates their drawing a design. We call the class of this kind of object, Commander. A Commander is an array of Pens. Pens controlled by a Commander can be given directions by having the Commander enumerate each Pen and evaluate a block containing Pen commands. So if a Commander's Pens should each go: 100, for example, then the Commander can be sent the message

A Commander also responds to messages to arrange its Pens so that interesting designs based on symmetries can be created. The two messages given in the description of Commander shown next are fanOut and lineUpFrom: startPoint to: endPoint. The first message arranges the Pens so that their angles are evenly distributed around 360 degrees. A Commander's Pens can be positioned evenly along a line using the message lineUpFrom:to:, where the arguments define the end points of the line.

A description for Commander follows. The message new: is redefined so that Pens are stored in each element of the Array.

The methods are useful examples of sending messages to instances of class Point. The image in Figure 19.6 was drawn by evaluating the expressions

The message do: to a Commander is inherited from its Collection superclass. 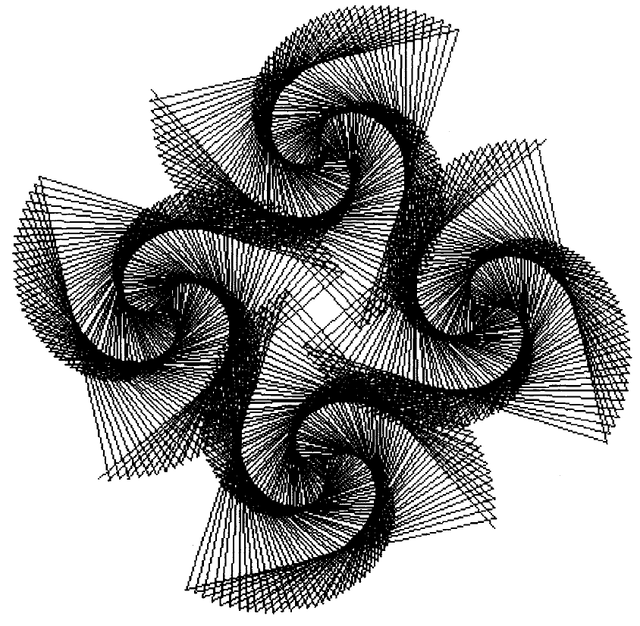 Another example of the use of a Commander is given in Figure 19.7. This image was created by using the message lineUpFrom:to:. It is a simple sequence of spirals arranged along a line at an angle, created by evaluating the expressions

An expanded description of Commander adds to Commander each message of the protocol of class Pen whose behavior changes position or orientation. This additional protocol supports the ability to send messages that are part of Pen's protocol to the Commander. Each such message is implemented as broadcasting the message to the elements of the collection. In this way, messages to Commander take the same form as messages to any Pen, rather than that of a do: message. With the class defined in this way, drawing sequences to a Commander appear more like drawing sequences to a Pen. Moreover, all the Pens commanded by a Commander draw in parallel; for example, all the spirals of Figures 19.6 or 19.7 would grow at once.

With this additional protocol, Figure 19.6 can be drawn by evaluating the expressions

and Figure 19.7 by the expressions