An object represents a component of the Smalltalk-80 software system. For example, objects represent

A message is a request for an object to carry out one of its operations. A message specifies which operation is desired, but not how that operation should be carried out. The receiver, the object to which the message was sent, determines how to carry out the requested operation. For example, addition is performed by sending a message to an object representing a number. The message specifies that the desired operation is addition and also specifies what number should be added to the receiver. The message does not specify how the addition will be performed. The receiver determines how to accomplish the addition. Computing is viewed as an intrinsic capability of objects that can be uniformly invoked by sending messages.

The set of messages to which an object can respond is called its interface with the rest of the system. The only way to interact with an object is through its interface. A crucial property of an object is that its private memory can be manipulated only by its own operations. A crucial property of messages is that they are the only way to invoke an object's operations. These properties insure that the implementation of one object cannot depend on the internal details of other objects, only on the messages to which they respond.

Messages insure the modularity of the system because they specify the type of operation desired, but not how that operation should be accomplished. For example, there are several representations of numerical values in the Smalltalk-80 system. Fractions, small integers, large integers, and floating point numbers are represented in different ways. They all understand the same message requesting the computation of their sum with another number, but each representation implies a different way to compute that sum. To interact with a number or any object, one need only know what messages it responds to, not how it is represented.

An example of a commonly-used data structure in programming is a dictionary, which associates names and values. In the Smalltalk-80 system, a dictionary is represented by an object that can perform two operations: associate a name with a new value, and find the value last associated with a particular name. A programmer using a dictionary must know how to specify these two operations with messages. Dictionary objects understand messages that make requests like "associate the name Brett with the value 3" and "what is the value associated with the name Dave?" Since everything is an object, the names, such as Brett or Dave, and the values, such as 3 or 30, are also represented by objects. Although a curious programmer may want to know how associations are represented in a dictionary, this internal implementation information is unnecessary for successful use of a dictionary. Knowledge of a dictionary's implementation is of interest only to the programmer who works on the definition of the dictionary object itself.

An important part of designing Smalltalk-80 programs is determining which kinds of objects should be described and which message names provide a useful vocabulary of interaction among these objects. A language is designed whenever the programmer specifies the messages that can be sent to an object. Appropriate choice of objects depends, of course, on the purposes to which the object will be put and the granularity of information to be manipulated. For example, if a simulation of an amusement park is to be created for the purpose of collecting data on queues at the various rides, then it would be useful to describe objects representing the rides, workers who control the rides, the waiting lines, and the people visiting the park. If the purpose of the simulation includes monitoring the consumption of food in the park, then objects representing these consumable resources are required. If the amount of money exchanged in the park is to be monitored, then details about the cost of rides have to be represented.

In designing a Smalltalk-80 application, then, choice of objects is the first key step. There really is nothing definitive to say about the "right way" to choose objects. As in any design process, this is an acquired skill. Different choices provide different bases for extending an application or for using the objects for other purposes. The skilled Smalltalk-80 programmer is mindful that the objects created for an application might prove more useful for other applications if a semantically complete set of functions for an object is specified. For example, a dictionary whose associations can be removed as well as added is generally more useful than an add-only version.

A class describes the implementation of a set of objects that all represent the same kind of system component. The individual objects described by a class are called its instances. A class describes the form of its instances' private memories and it describes how they carry out their operations. For example, there is a system class that describes the implementation of objects representing rectangular areas. This class describes how the individual instances remember the locations of their areas and also how the instances carry out the operations that rectangular areas perform. Every object in the Smalltalk-80 system is an instance of a class. Even an object that represents a unique system component is implemented as the single instance of a class. Programming in the Smalltalk-80 system consists of creating classes, creating instances of classes, and specifying sequences of message exchanges among these objects.

Each method in a class tells how to perform the operation requested by a particular type of message. When that type of message is sent to any instance of the class, the method is executed. The methods used by all Rectangles describe how to perform their operations in terms of the two Points representing opposing corners. For example, one message asks a Rectangle for the location of its center. The corresponding method tells how to calculate the center by finding the point halfway between the opposing corners.

A class includes a method for each type of operation its instances can perform. A method may specify some changes to the object's private memory and / or some other messages to be sent. A method also specifies an object that should be returned as the value of the invoking message. An object's methods can access the object's own instance variables, but not those of any other objects. For example, the method a Rectangle uses to compute its center has access to the two Points referred to by its instance variables; however, the method cannot access the instance variables of those Points. The method specifies messages to be sent to the Points asking them to perform the required calculations.

Examples are an important part of the description of a programming language and environment. Many of the examples used in this book are taken from the classes found in the standard Smalltalk-80 system. Other examples are taken from classes that might be added to the system to enhance its functionality. The first part of the book draws examples from an application that might be added to the system to maintain simple financial histories for individuals, households, clubs, or small businesses. The full application allows information about financial transactions to be entered and views of that information to be displayed. Figure 1.1 shows a view of a financial history as it might appear on a Smalltalk-80 display screen. The top two parts of the view show two views of the amount of money spent for various reasons. The next view down shows how the cash-on-hand fluctuated over time as transactions were made.

At the bottom of the picture are two areas in which the user can type in order to add new expenditures and incomes to the history. When new information is added, the three views are automatically updated. In Figure 1.2, a new expenditure for food has been added.

This application requires the addition of several classes to the system. These new classes describe the different kinds of view as well as the underlying financial history information. The class that actually records the financial information is named FinancialHistory and will be used as an example in the next four chapters. This example application will make use of several classes already in the system; it will use numbers to represent amounts of money and strings to represent the reasons for expenditures and the sources of income. 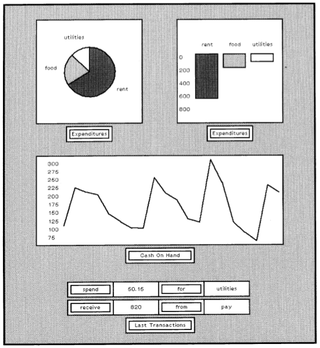 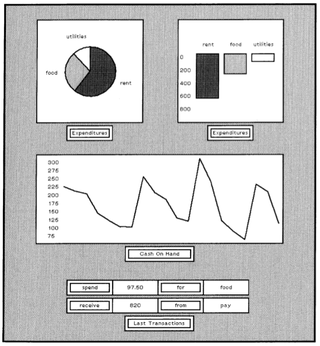 An implementation of these operations is specified in the class description shown inside the front cover of this book. The form of class descriptions will be described in Chapters 3, 4, and 5.

The Smalltalk-80 system includes a set of classes that provides the standard functionality of a programming language and environment: arithmetic, data structures, control structures, and input/output facilities. The functionality of these classes will be specified in detail in Part Two of this book. Figure 1.3 is a diagram of the system classes presented in Part Two. Lines are drawn around groups of related classes; the groups are labeled to indicate the chapters in which the specifications of the classes can be found.

Most of the objects in the Smalltalk-80 system function as data structures of some kind. However, while most objects also have other functionality, there is a set of classes representing more or less pure data structures. These classes represent different types of collections. The elements of some collections are unordered while the elements of others are ordered. Of the collections with unordered elements, there are bags that allow duplicate elements and sets that don't allow duplication. There are also dictionaries that associate pairs of objects. Of the collections with ordered elements, some have the order specified externally when elements are added and others determine the order based on properties of the elements themselves. The common data structures of arrays and strings are provided by classes that have associative behavior (associating indices and elements) and external ordering (corresponding to the inherent ordering of the indices).

The Smalltalk-80 system includes objects and messages that implement the standard control structures found in most programming languages. They provide conditional selection similar to the if-then-else statements of Algol and conditional repetition similar to its while and until statements. Objects representing independent processes and mechanisms for scheduling and synchronous interaction are also provided. Two classes are provided to support these control structures. Booleans represent the two truth values and blocks represent sequences of actions. Booleans and blocks can also be used to create new kinds of control structures.

Objects representing organizational structures for classes and methods help the programmer keep track of the system, and objects representing histories of software modification help interface with the efforts of other programmers. Even the execution state of a method is represented by an object. These objects are called contexts and are analogous to stack frames or activation records of other systems.

The Smalltalk-80 system includes classes of objects that can be used to view and edit information. Classes helpful for presenting graphical views represent points, lines, rectangles, and arcs. Since the Smalltalk-80 system is oriented toward a bitmap display, there are classes for representing and manipulating bitmap images. There are also classes for representing and manipulating the more specific use of bitmap images for character fonts, text, and cursors.

Built from these graphical objects are other objects representing rectangular windows, command menus, and content selections. There are also objects that represent the user's actions on the input devices and how these relate to the information being viewed. Classes representing specific viewing and editing mechanisms constructed from these components provide views for classes, contexts, and documents containing text and graphics. The views of classes provide the fundamental mechanism to interact with the software in the system. Smalltalk-80 views and editors are presented in a separate book.

The Smalltalk-80 system allows communication with external media. The standard external medium is a disk file system. Objects represent individual files as well as directories. If a connection to a communications network is available, it can be accessed through objects as well.