In earlier versions of the Smalltalk system, there was only one metaclass, named Class. It corresponded to the class organization depicted in Figure 5.1. As used in Chapter 4, a box denotes a class and a circle denotes an instance of the class in which it is contained. Where possible, the box is labeled with the name of the class it represents. Note that there is one circle in the box labeled Class for each box in the diagram. 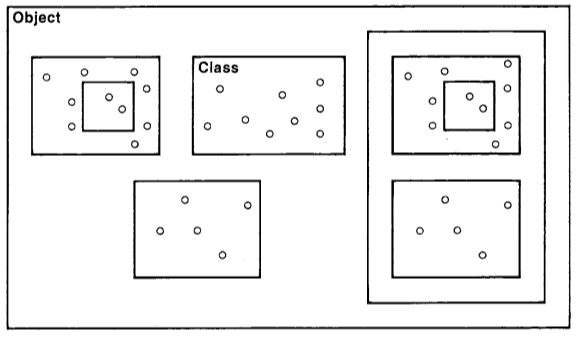 This approach had the difficulty that the message protocol of all classes was constrained to be the same since it was specified in one place. In particular, the messages used to create new instances were the same for all classes and could not take any special initialization requirements into account. With a single metaclass, all classes respond to the message new or new: by returning an instance whose instance variables all refer to nil. For most objects, nil is not a reasonable instance variable value, so new instances have to be initialized by sending another message. The programmer must ensure that every time a new or new: is sent, another message is sent to the new object so that it will be properly initialized. Examples of this kind of initialization were shown in Chapter 4 for SmallDictionary and FinancialHistory.

The Smalltalk-80 system removes the restriction that all classes have the same message protocol by making each class an instance of its own metaclass. Whenever a new class is created, a new metaclass is created for it automatically. Metaclasses are similar to other classes because they contain the methods used by their instances. Metaclasses are different from other classes because they are not themselves instances of metaclasses. Instead, they are all instances of a class called Metaclass. Also, metaclasses do not have class names. A metaclass can be accessed by sending its instance the unary message class. For example, Rectangle's metaclass can be referred to with the expression Rectangle class.

These messages are meaningless to Point, the class whose instances represent two-dimensional locations. Point creates a new instance in response to a message with selector x:y: and two arguments specifying the coordinates. This message is, in turn, meaningless to Time or Date.

A message with the selector origin:extent: takes as arguments the upper left corner and a Point representing the width and height. The same rectangle could have been created by the following expression.

In the Smalltalk-80 system, Class is an abstract superclass for all of the metaclasses. Class describes the general nature of classes. Each metaclass adds the behavior specific to its single instance. Metaclasses may add new instance creation messages like those of Date, Time, Point, and Rectangle mentioned above, or they may redefine the fundamental new and new: messages in order to perform some default initialization.

The organization of classes and instances in the system, as described so far, is illustrated in Figure 5.2. 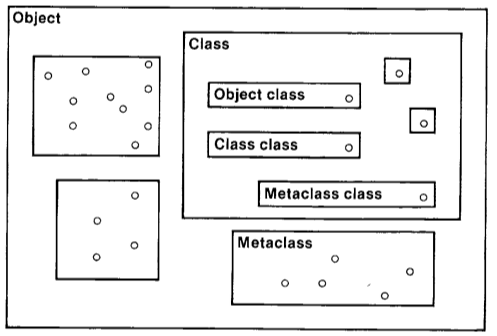 Three changes have been made to the implementation description.

This example illustrates how metaclasses create initialized instances. The instance creation methods for initialBatance: and new do not have direct access to the instance variables of the new instance (cashOnHand, incomes, and expenses). This is because the methods are not a part of the class of the new instance, but rather of the class's class. Therefore, the instance creation methods first create uninitialized instances and then send an initialization message, setInitialBalance:, to the new instance. The method for this message is found in the instance methods part of FinancialHistory's implementation description; it can assign appropriate values to the instance variables. The initialization message is not considered part of the external protocol of FinancialHistory so it is categorized as private. It is typically only sent once and only by a class method.

The old initialization message initialBalance: was deleted because the proper way to create a FinancialHistory is to use an expression such as

Like other classes, a metaclass inherits from a superclass. The simplest way to structure the inheritance of metaclasses would be to make each one a subclass of Class. This organization was shown in Figure 5.2. Class describes the general nature of classes. Each metaclass adds behavior specific to its instance. Metaclasses may add new instance creation messages or they may redefine the fundamental new and new: messages to perform some default initialization.

An abstract class named ClassDescription was provided to describe classes and their instances. Class and Metaclass are subclasses of ClassDescription. Since the superclass chain of all objects ends at Object and Object has no superclass, the superclass of Object's metaclass is Class. From Class, the metaclasses inherit messages that provide protocol for the creation of instances (Figure 5.3).

The superclass chain from Class leads eventually to class Object. Notice that the hierarchy of boxes with the box labeled Object class is like that of the hierarchy of boxes within the box labeled Object; this similarity illustrates the parallel hierarchies. A full description of this part of the system, including the relationship between Metaclass and its metaclass, is provided in Chapter 16. 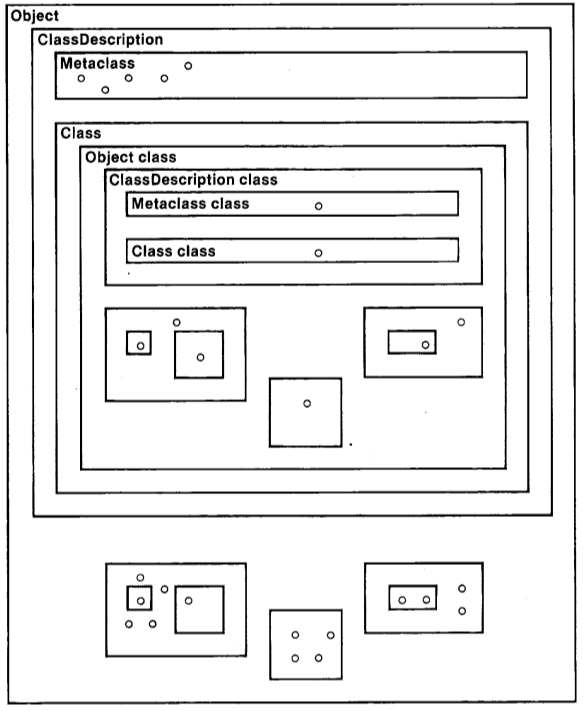 As an example of the metaclass inheritance hierarchy, consider the implementation of initialBalance: in FinancialHistory class.

This method creates a new instance by evaluating the expression super new; it uses the method for new found in the class methods of the superclass, not the class methods found in this class. It then sends the new instance the message setInitialBalance: with the initial amount of the balance as the argument. Similarly, new is reimplemented as creating an instance using super new followed by setInitialBalance:. 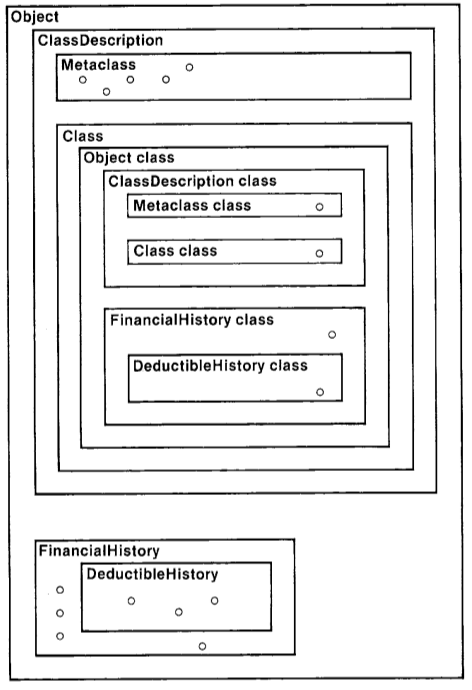 If we evaluate the expression

the search for the response to initialBalance: begins in FinancialHistory class, i.e., in the class methods for FinancialHistory. A method for that selector is found there. The method consists of two messages:

is carried out in a similar way. The response to new is found in FinancialHistory class (i.e., in the class methods of FinancialHistory). The remaining actions are the same as for initialBalance: with the exception of the value of the argument to setInitialBalance:. The instance creation methods must use super new in order to avoid invoking the same method recursively.

This version of DeductibleHistory adds five instance methods, one of which is isltemizable. The response to this message is true or false depending on whether enough deductions have been accumulated in order to itemize deductions on a tax report. The tax law specifies that a minimum deduction of 2300 can be taken, so if the accumulation is less, the standard deduction should be used. The constant, 2300, is referred to by the class variable MinimumDeductions. In order to successfully send an instance of DeductibleHistory the message isltemizable, the class variable MinimumDeductions must be assigned its numeric value. This is done by sending the class the message initialize before any instances are created.

This message only has to be sent once, after the class initialization message is first defined. The variable is shared by each new instance of the class.

According to the above class description, a new instance of DeductibleHistory can be created by sending the class the messages initialBalance: or new, just as for the superclass FinancialHistory. Suppose we evaluate the expression

newHistory is then sent the message initializeDeductions. The search begins in the class of the receiver, newHistory; the class is DeductibleHistory. The method is found. It assigns the value of the fourth instance variable to be 0.

The third expression of the instance creation message returns the new instance.

An alternative way to implement the class DeductibleHistory is presented next. In this alternative class description, the instance-creation class methods of FinancialHistory are not reimplemented. Rather, the private instance-method message setInitialBalance: is overridden in order to account for the additional instance variable.

Using this alternative class description for DeductibleHistory, the evaluation of the response to initialBalance: in

is to search in DeductibleHistory class for initialBalance:. It is not found. Continue the search in the superclass, FinancialHistory class. It is found. The method evaluated consists of the expression

Determining the actual actions taken when a message is sent involves searching the methods in the class hierarchy of the receiver. The search begins with the class of the receiver and follows the superclass chain. If not found after searching the last superclass, Object, an error is reported. If the receiver is a class, its class is a metaclass. The messages to which a class can respond are listed in the implementation description in the part entitled "class methods." If the receiver is not a class, then the messages to which it can respond are listed in its implementation description in the part entitled "instance methods."